First, thank you for subscribing and welcome to this, my first newsletter.Contents 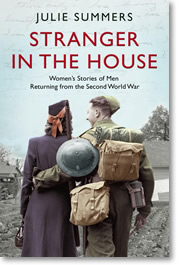 – now out in paperbackStranger in the House, which was published in September 2008, came out in paperback last month and has recently received two good reviews in the Guardian and Sunday Times. I feel enormously lucky to have met so many remarkable men and women through my research for this book and I am fortunate that most have stayed in touch. Certainly the comments I receive when I give talks about Stranger convince me that it tapped into a previously untouched seam and it is lovely to hear that the stories in the book chime with people’s own experiences and bring back memories. I always felt with Stranger that it was a joint effort so renewed thanks and respect to all who contributed.Worlds Out Loud 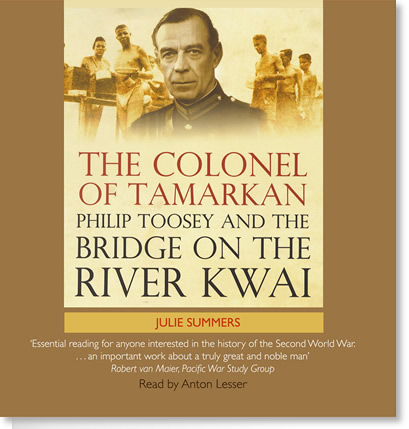 Chrome Audio, the company that produced the lovely audio-CD of Stranger in the House, which came out last autumn, is about to publish The Colonel of Tamarkan in abridged form. Being abridged felt to me rather like having my hair cut by Edward Scissorhands – unnerving but the result a lovely surprise. Neville Teller is an experienced abridger (he did Stranger too) and he has managed, I think very successfully, to keep the feeling of the book whilst reducing it to fit into three and a half hours of audio. The choice of Anton Lesser to read The Colonel was inspired and from the minute it was suggested I knew it was not only right but perfect.

The story of the Death Railway is at its most poignant when told first hand. During the course of researching The Colonel of Tamarkan I spoke to many former Far Eastern prisoners of war and I was always moved by their personal accounts. 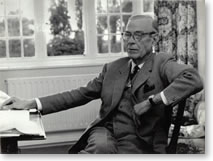 Phil Toosey in his study at Heathcote in the early 1970s at a time when he was recording his memoirs© Toosey Family CollectionMy grandfather died in 1975 so I never heard him speak of it but Anton brings colour and empathy to his experiences in a way that I had hardly dared to hope. Hearing the story come alive through Anton’s reading is one of the most exciting experiences I can recall. He succeeds in capturing Toosey’s humour, his mental toughness, his honesty but also his despair, when the camps were bombed by the RAF in 1944.

Anton was in the middle of rehearsing for Ibsen’s The Doll’s House and he took time on a precious day off to record the book. I was in Oxford watching the City Bumps in which Simon was rowing but I raced down to London for the lunch-break and to meet Anton at the little studio in Swiss Cottage. He emerged from the recording room with his glasses on a chain around his neck and looking slightly dazed, as I am sure anyone would after four solid hours of reading. It was a thrilling moment to meet this remarkable actor, whom I greatly admire, and to listen to him talking about how he interpreted the words and actions of my grandfather. He said it was easier than recording a Dickens novel as he only had to keep a dozen or so characters in his head rather than scores as he did when he read Great Expectations. He asked me how he thought he should read the last chapter of the book about my grandfather’s death and we decided he should read it straight and without emotion. 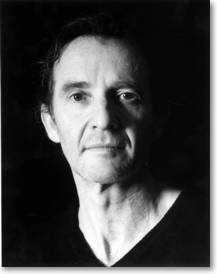 Anton LesserAfter his sandwich he went back into the recording studio and I returned to Oxford to watch the final race in the bumps. Catriona, at Chrome, told me that when Anton read the last chapter she could not follow the script as her eyes were brimming with tears.

When it came to adding a bit of music to the audio she and I discussed what would be appropriate. In the end she decided to commission a whistling of the original 1914 Colonel Bogey march. To our astonishment the musician, Shannon Harris, had a strong link to the FEPOW story – his grandfather was imprisoned by the Japanese in a POW camp in Java. It is a truly wonderful recording and I hope you enjoy it. The audio-CD is out shortly. To pre-order a copy you can email office@chromeaudio.com.Researching & Writing 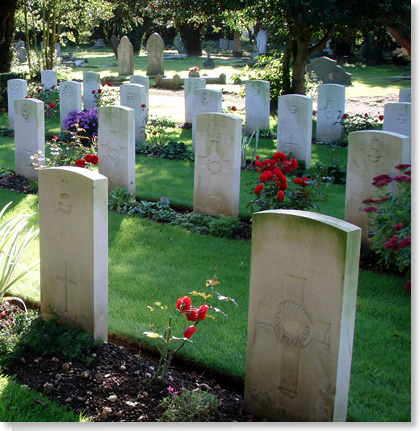 Moreton-in-Marsh New Cemetery, GloucestershireOn the writing front I am being kept busy with a little book for Shire Publications on Commonwealth war cemeteries and a bigger book for the Commonwealth War Graves Commission about their new cemetery at Fromelles in France, which has been much in the news. The cemetery is being built to take the remains of upwards of 250 Australian and British soldiers who died in the Battle of Fromelles in July 1916 and who were buried by the Germans in a mass grave, which was discovered by an Australian amateur historian after years of research. DNA tests are currently underway and they hope to identify up to 10% of the soldiers buried in the mass grave. 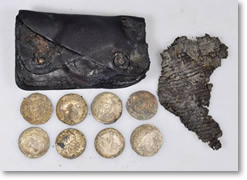 Artefacts from the mass grave at FromellesThe book will commemorate the building of the first new CWGC war cemetery in half a century and there will be an exhibition at the Imperial War Museum from July 2010 in which we will be showing some of the artefacts that have been found in the mass grave, including a return train ticket from Fremantle to Perth, a leather purse with coins and a heart shaped leather pouch containing a solid gold cross. If you are at all interested in the Fromelles story then the CWGC website has excellent information, daily blogs, a photo gallery and much more. Follow www.cwgc.org/fromelles. 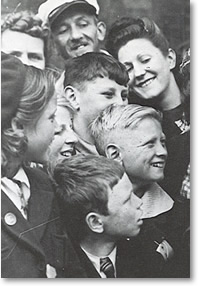 Returning evacueesI am also working on another book for Simon & Schuster, this time about evacuee children and how their returns home affected their lives. So many books and films look at what happened when the children went away but little is known about what happened once they came back . The stories and experiences are as varied as you can imagine – some funny, some heartening and some, inevitably, tragic. I am over halfway through the research and will start writing in January.Pen Thoughts

One of the strange things I find about writing is that it is at once a lonely but also intensely social thing to do. Meeting archivists and librarians is one of the great pleasures for me and I thought I would just mention them here. They do an extraordinary job looking after papers, letters, documents, diaries, photographs and they do it day in, day out and often without any thanks. One archive I worked in four years ago was the Baring Archive at ING in central London. Not the place you would expect to find a treasure trove but I can promise you it is. The archivists have kept it in perfect order throughout stormy times, and the amount of detail and colour it brings to the life of a family owned bank in the early twentieth century is wonderful. I have just heard that the Baring Archive has been granted Designated status. It might not change your life but it means that a very important, if tiny, slice of our social history is secure. Bravo to archives and archivists.Forthcoming events for autumn 2009

I’m always delighted to hear from anyone with feedback or general comments so do please get in touch if you wish, especially as this is a maiden voyage.